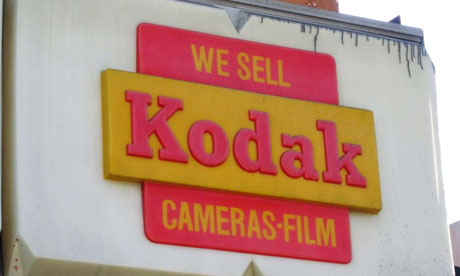 When I saw this article ‘Former Trailblazer Kodak files chapter 11‘ I was at first shocked. Yet when I thought about it I realised that neither myself nor any of my friends (that I know of) are users of Kodak products. With me doing acting in my spare time I know a lot of photographers and filmmakers and they all pretty much have Canon digital cameras, or if they don’t, that’s what they want to have!

For me Kodak is tied up with the theme of ‘Kodak moments’. Remember that advertising from years ago? It was heart warming and evocative and then it’s time had come. Like the switch from silent movies to talkies, the switch from film to digital is a march that will not stop.

Through the 1990s, Kodak splurged $4 billion on developing the photo technology inside most of today’s cellphones and digital devices. But a reluctance to ease its heavy reliance on film allowed rivals like Canon Inc. and Sony Corp. to rush largely unhindered into the fast-emerging digital arena. The immensely lucrative analog business Kodak worried about undermining too soon was virtually erased in a decade by the filmless photography it invented.

Was Intrapreneurship Missing at Kodak?

Yet according to ‘Former Trailblazer Kodak files chapter 11‘  the senior management at Kodak were reluctant to let go of the past.  One of the key things that I share with intrapreneurs is that they have to admit the reality of a situation before they can move on. Yet I have seen time and time again in my corporate life experience leaders refusing to admit that their world has changed. What comes from ego and what comes from fear (are the two even distinct?) isn’t clear and at the end of the day, doesn’t really matter.

What matters is what you, today, can take from reading this article. Are your peers or team members attempting to alert you to signs that the landscape has changed? Have you had a niggling doubt or feeling that you keep shoving to one side? If either of these is the case then please sit up and take notice. Start discussions with others to explore possible scenarios and research the facts.

The other interesting aspect of Kodak’s situation (from it being a lesson perspective, that is) is that they didn’t actually capitalise on the technology that they created. With hindsight it seems ludicrous. Who knows what contributed to this decision but with such a massive shift in the industry to not have put more of its resources to digital products was extremely short-sighted.

This is why it is so important for leaders and their teams to have that intrapreneurial edge so that  they have the knowledge and the skills to assess situations like this. By having teams with a variety of Talent Dynamics profiles then some would have been future focused and visionary about the implications of Kodak’s innovation, others in touch with customers’ needs and raising concerns if not met and others still looking at the realities of the situation and practicalities of implementation.

For now the company intends to focus on printers and perhaps that is the future. Somehow it doesn’t seem to capture for me the ethos of Kodak Moments, time will tell and I wish them well.