↓ Skip to Main Content
Home › Blog › Are you Doing This to Your Team?

Are you Doing This to Your Team? 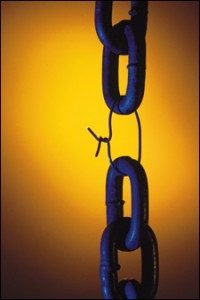 Are you the weakest link in your teamwork?

I just had to share this article about teamwork that I came across on twitter. It really sums up the lack of respect that a lot of managers seem to hold for their team members. Or is it simply incompetence?

The article basically outlines how certain managers and directors have a tendancy to call out of office hours meetings only half-an-hour before the end of the day. Well, if it’s a crisis then that’s understandable you may think. But no. No crisis. Not a crisis that’s discussed in the meeting that is…

However I do think there is a crisis. It’s a crisis of a lack of co-ordination, communication and consideration.

Where teamwork co-ordination truly exists you don’t need ‘catch up’ meetings. Each meeting has a clear purpose and a regular rythym and routine so that discussions happen in a timely manner. Different thinking is required for strategic meetings than ones that are operational and tactical. In fact, if you’ve got teams that are in flow you will probably have different people attending or certainly leading them.

If something comes up that needs to be addressed urgently before the next planned meeting then a phone call to the key person or specific meeting to address that issue, and only that issue, can be organised. This is not about being rigid and regimented, it’s about making sure that you’ve got the right people doing the right things at the right time.

In addition to the planned meetings above, to help avoid avoidable crisis’ good communication is vital for effective teamwork. A fully functional team will seek input, ideas and feedback on their plans. A good manager will have check in times with team members to ensure that each person is on track with their accountabilities and see if what help they may need if not.

I keep saying it; Business IS Personal!

Being considerate of your colleagues is a fundamental aspect to enjoying trust and respect with your team. Think that’s soft? Have a look at the research that proves how much a lack of trust costs companies. You don’t have to be ‘bezzie mates’, however being aware that James picks up his children on a Friday at 4pm and that Sarah has a night class on Tuesdays means that you’ll think twice before eating into that personal time. The loyalty you’ll generate will help you reap the reward of good relationships.

Many people won’t speak up to the boss but will act out their frustration and upset in numerous ways – usually with no idea they’re doing it! – from taking packets of post-its home in lieu of overtime to ‘forgetting’ to call that important client.

Of course, ultimately your best team members are likely to leave for pastures new where they can achieve true teamwork and great performance.

So ask yourself, what could you be doing to your team that could be adversely affecting their performance? If you’re feeling really brave they may even tell you if asked…